It was a lovely surprise to find Celery –Apium graveolens growing on a bed nearby a water channel that brings water from a local mountain stream into the garden. It’s a marshland plant in the family Apiaceae that has been cultivated as a vegetable since antiquity. I assume the seed has washed in with the water, a lovely surprise however it got here!

The Apiaceae family has some really useful edible and medicinal members, like parsley, parsnips, dill, fennel, and Angelica. However, it also includes the deadly poisonous hemlock, water hemlock, and poison parsley, two of which grow in our gardens, so exceptional care should be taken with identifying plants in this family. When the state of Greece turned against Socrates for his refusal to recognize the same Gods in 399 BC, he was sentenced to death by hemlock poisoning. Socrates apparently accepted this judgment rather than fleeing into exile and willingly drunk the Poison hemlock – Conium maculatummixture which would have likely resulted in his death caused by respiratory failure.

One plant that is highly edible and worthy of a place in any landscapes is A.sphaerocephlon –Round-Headed Leek, the last Allium to flower out of the new collection we introduced to the nursery this year. It’s a beautiful plant, as with other Alliums a perennial bulb, growing to 0.6m in height and to Europe including Britain. Although quite tolerant of different soil types, heavy clay soils should be avoided with Alliums. They really seem to thrive in open, sunny positions in well-drained soil. A.sphaerocephlon is fairly drought tolerant and is hardy to zones 4 – 8. Elegant egg-shaped flowers that turn from green to purple as they ripen bloom in July – August and are really quite something special.

Uses: I have seen a photo of this Allium growing with mixed grass species and the effect was stunning. Bulbs could be interplanted in this way near an annual vegetable plot to encourage useful pollinators. A.sphaerocephalon would also suit being placed in another polyculture with other flowering perennials such as Lilies. Can be grown in gravely soils or rocky areas of the garden, and highly ornamental when planted in groups of  10 – 15 bulbs. Should not be grown with legumes.

Edibility: The bulbs reportedly make a great onion substitute and like the other Alliums listed, the leaves are delicious in salads, as are the flowers. Although no specific mention of medicinal uses has been seen for this species, members of this genus are in general very healthy additions to the diet and are thought to reduce cholesterol and improve circulation.

Biodiversity: Striking purple blooms that are known for attracting bees, butterflies​/​moths, birds and other pollinators.  The whole plant is said to deter insects and moles.

Propagation: Bulbs should be planted 10cm deep in the autumn for emergence the following spring.  Once clump forming, can be divided in the spring. Round-headed leek is easy to grow.  Plants often divide freely at the base.

We are offering more Alliums in our
Bionursery, and you can order an Edible Allium multi-pack from our click to buy page
here. Plants and bulbs will be sent out in the autumn, but you can order now to reserve your plants as we have a limited supply.

We’ve been looking at how to work with the wild the last few weeks as part of our Regenerative Landscape Design Course. One of the exercises was to identify some pollinators, pest predators, and decomposers and Ani Daw, who is taking the course, got a great photo of a Parasitoid Wasp at work on Aphids attacking Broad beans in here vegetable garden. Here is Ani’s slide from her exercise with some more information on this Parasitoid wasp.

Here are a few other observations I’ve made in the gardens this week: Cotton Lavender – Santolina Chamaecyparissus – The aromatic leaves can be used when cooking as a pleasant flavoring. 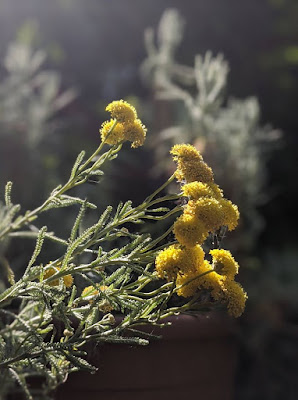 Fruit forming on a Sorbus.sp. I sowed this tree from seed 8 years ago, and the fruits make a nice nibble in early winter when they soften up after a frost 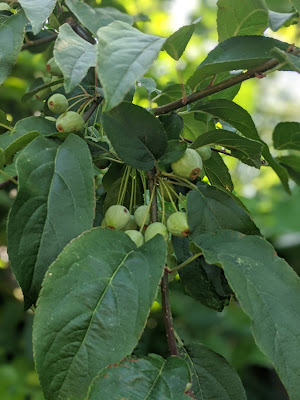 Male European Stag Beetle – Lunacus cervus. Always a pleasure to meet them in the summer. 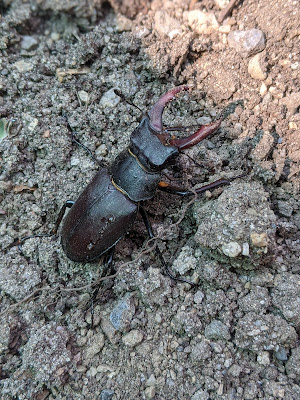 Ajuga reptans – Bugle has really attractive foliage with bronze tones and is a great ground cover, adding some diversity to the shades of colour within this layer. Reptans means creeping (like a reptile), and it grows at a medium – fast rate mainly by growing surface runners that root at intervals along their length. forming a fairly dense carpet of foliage quite quickly, and smothering out weeds as it goes. It’s also excellent to help with soil erosion. Bugle has quite an extensive history in herbal medicine, particularly to stop bleeding where a tea was made and applied externally. Flowers are small, blue and highly attractive, lasting from April to June and pollinated by bees and the Lepidoptera family. 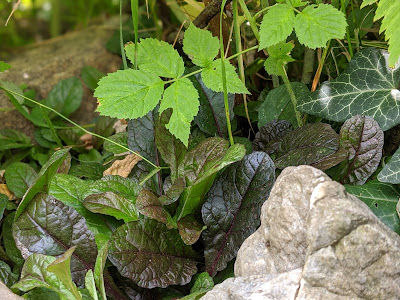 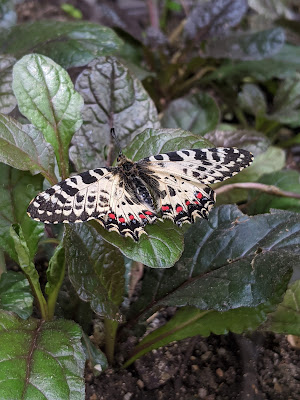 A fritillary butterfly resting on some Bugle plants in the nursery. The caterpillars of these butterflies can be pests to certain crops, but the butterflies are also the prey of other useful pest predators

Speaking of pest predators, here’s a simple key to things you can do to actively encourage and keep beneficial organisms, specifically invertebrates within your landscapes;

Archie’s been busy weeding, irrigating and mulching the bulb nursery recently. The onions that we’re growing in the wooden raised beds seem to be doing better than in our traditional raised beds that aren’t constructed with wooden sides, but built up originally using a chicken tractor and supported on the sides with the wild marginal plants. I think the success is probably due to the fact they are being grown in a patch formation polyculture, which likely suits onions better, as in a mixed formation they will become shaded out pretty quickly by plants occupying the upper canopy, such as the tomatoes.